“Where did all the men go?” It’s such a common saying. It seems like what we have left aren’t the ideal “real men” else, that saying wouldn’t have come to existence. I grew up a young man taught in church and in the ways of God. The world is saying that ‘men who grow up in church are wussies’ that they’re ‘nice guys’. Well, I’m not. 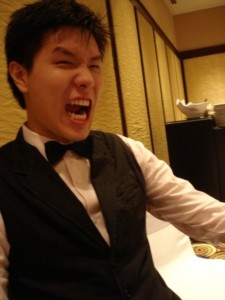 I know this isn't the best pic for this post... Hahaha! Just wanted to make you guys laugh

It might be true that men who grew up in church are ‘wussies’ because they are indeed trained up to be so. The truth about God’s fierce nature is not encouraged in their lives. Men who grew up in church are told to be responsible, disciplined, humble, well-mannered, etc. While those are all true, the other side of the truth isn’t revealed – that men have to fight for what they believe in, men have to be fierce for their values and principles, men have to decide and make a stand and fight, etc. While it’s good to be nice, it’s not how God designed us.

Men are made in the image and likeness of God – and God is a competitive God. He is definitely not your idea of a ‘nice guy’. He is the ‘Lion of Judah’ a Warrior, He is the King of Kings – He made the Earth. Before we built our cities and roads, it was all wild. God made the world a wild place and he deemed it suitable for us. What does that tell you?

Jesus fought for what He believed in. He harshly rebuked the self-righteous pharisees and shouted against Satan’s temptations. He drove out merchants in the Temple area (which I believe is not something that most men have guts to do). Jesus was a fierce man. He wasn’t in any way a ‘wussy’. He knew when to fight, how to fight, what to fight for. While it’s true that Jesus was a humble, gentle, wise and loving person, we shouldn’t cover up the other side of Him. Jesus was a man.