I’m pretty sure you’ve experienced debates and arguments about the Bible even once in your life. Yes, even when you’re not a Christian. Why is it that there are so many disagreements about the Bible? So many doubts about it’s roots? Isn’t there a knockdown argument that can once-and-for-all shut the argument up? 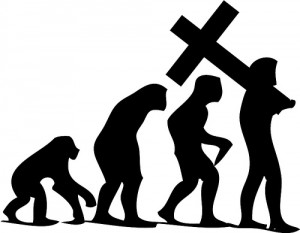 Biblical evolution? Is there such a thing?

Truth has been watered down

And polluted. These days you just don’t know what’s true anymore. People tell you one thing and another group of people tell you another. Both have evidences to back up their claims. It’s crazy how the world can manipulate evidences and results nowadays. It can certainly confuse you.

Evolution tells you one thing. Science and recent discoveries makes it so believable to the point that they have concrete ‘evidences’ such as dinosaur bones and pre-historic human findings. Or so they claim.

And if you don’t know the truth, the concreteness and evidences will lure you into believing their argument. And if their argument is true for you, then creation will definitely automatically be false. Because there can be no agreement between two ‘truths’ with their core essence being in disagreement with each other. If one is true, the other must be false.

The Bible as we know, is written by people through the power and influence of the Holy Spirit in them. It is written by faith. So it takes faith to read and understand it.

Not all people believe. Not all people agree that there is even such a thing called faith. And as such, people reject the Bible and choose to believe in things that don’t take faith in order for them to believe it.

The reason why the God did not make a knock-down argument for the Bible is to leave room for faith. Because it will take no less than faith for you to believe Him. That He exists. And that His Word is the truth. The only solid truth that will never change in this constantly changing world we are in.

Only faith can enable you to believe the Bible.

Made by faith. Approached by faith.

The most powerful undeniable evidence of the Bible is the changed lives it has impacted throughout the generations that have passed the world by. Has evolution ever changed lives like the Word of God? Even once?

Say you believe it.