More often than not, when we travel to an unfamiliar place – whether it’s a new summer haven or a developing tourist spot, one of the first things we ask is directions on how to get there. We’d search for a roadmap and study it, so that when we decide to go, we wouldn’t be lost.

This is based on a devotion I shared over the weekend. Somehow, I was convicted to write it down to clear the points I’ve mentioned in the message and support them with scripture. For those who’ve heard the devotion, I hope this article would convey the points I wanted to bring across more clearly. 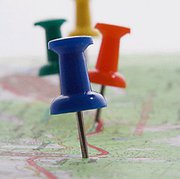 Somehow, we behave the same way when it comes to God’s Will. When God casts His vision, we would want to ask Him for full details. But God often reveals them step by step.

Over the past couple of weeks I’ve encountered two stories in the bible that fascinated me. One is in Mark 8:22-26 where Jesus performed a two-staged miracle in healing a blind man from Bethsaida. The other is from 2 Kings 2:1-11 where Elijah was taken up to heaven. I had the same question on both stories – why did God made the blind man and Elijah go through “checkpoints”? Why did He reveal His Will step by step? What was God’s point in doing so?

God wants us to know who He is. It is often hard to know God’s will in certain aspects of our lives, not because we don’t pray enough nor is it because He’s just messing up with our heads. All over scripture God tells us, “I am the Lord your God”. In our anxious moments to know what God has in store for us at the end of His Will He tells us, “Be still and know that I am God” (Psalm 46:10). I believe that more than the destination, He wants us to know who He is – His omnipotence, His omnipresence, His omniscience, His joy, His peace, and His love.

Christ makes us ready, and often that takes time. Ecclesiastes 3:1 tells us that there is a time for everything. It’s true that God casts His vision on us – but He reveals the steps to achieve that vision step by step. He told Abraham that he will be the father of all nations, but God didn’t tell Him right away that He will test his faith by asking him to sacrifice Isaac. He had a vision for Nehemiah to rebuild the walls of Jerusalem, but it wasn’t until chapter 4 that opposition came.

Try doing this as an experiment. Go to a room with bright lights and stay there for a while, then suddenly turn off the lights. Notice that at that instant all you will see is pitch black, but give it time and slowly your eyes will adjust and you’ll start seeing. In the same way when you suddenly turn on the lights, you squint because the light is too much and your eyes aren’t ready for it, but in a few moments they will adjust and you will see things clearly.

Think of it the same way with God’s Will. 1 Corinthians 13:12 says “…Now I know in part; then I shall know fully, even as I am fully known.”

God wants us to trust Him. The notion of the unknown often gives way to trust in the One who truly knows. The bible tells us, “Trust in the Lord with all your heart and lean not on your understanding” (Proverbs 3:5). This involves trusting Him in situations where we will be inconvenienced, situations we don’t want to be in or situations we want to skip. We hold on to the promise that in all things God works for the good of those who love him, who have been called according to his purpose. (Romans 8:28)

Instead of having a roadmap, wouldn’t be better to have someone who truly knows where we are supposed to go walk us there?