1. Real humility is not even knowing it 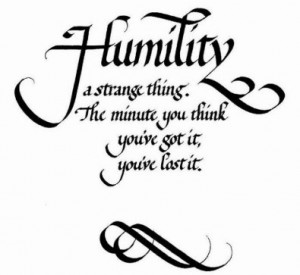 Knowing something is assurance of it’s existence. A fascinating trait of humility is that it should not be assured even of it’s own existence. True humility is not even knowing it’s there because ‘knowing’ or ‘gauging’ it’s existence could misfocus the heart of man to a proud end.

When you start wanting to ‘know’ your humility, you start gauging how humble you are. King David is a wonderful analogy of this when he took a census of his country to ’know’ or ‘gague’ the strength of his fighting men. God became angry at this because taking a census would, in the end, refocus David’s heart to become proud because of his army’s strength rather than being humble and dependent on God.

2. Real humility doesn’t speak about itself

Out of the fulness of the heart, the mouth speaks. Doesn’t mean when your heart is full of humility, you will keep on speaking about how humble you are. Go back to point #1, true humility means the heart doesn’t even know it is humble because it doesn’t focus on that. True humility doesn’t say anything about itself, instead it gives encouragement to other people and puts others first and forgets about itself.

3. Real humility manifests itself in lavish praise/encourage of others (praise, not flattery)

Putting others first is an act of selflessness. Selflessness is one of the most visible forms of humility, won’t you agree? If you keep on praising yourself, you have a proud heart and that is selfish. But in praising/ encouraging others (no matter how hard it is for you because it hurts your pride to do so) you are practicing humility on your part – especially if you know that you are a lot better than that person in the aspect where you are praising/encouraging him (still praise/encourage him because he is good in what he does!)

Sometimes we don’t really listen. Yes we give them some attention, but the words they say are being deflected by our hearts and minds – probably because of pride. Real humility listens to people no matter how hard-hitting or, on the other hand, seemingly senseless his words are to you.

Listening is a great skill and it takes a lot of humility especially if you know you’re a lot more skillful and knowledgable than the other person who’s doing the talking.