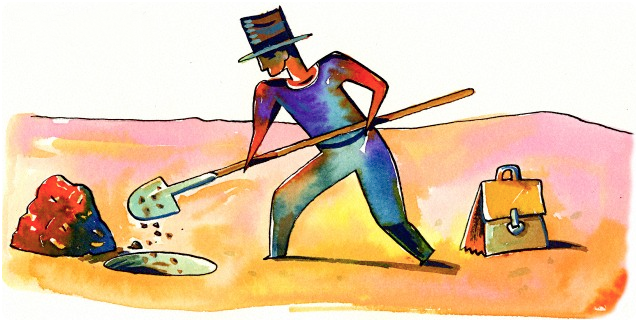 It has always eluded me as to why God would include a second servant in the parable who has been given two talents. Why the need to highlight a servant with lesser talents than the first?

14 “Again, it will be like a man going on a journey, who called his servants and entrusted his wealth to them. 15 To one he gave five bags of gold, to another two bags, and to another one bag, each according to his ability. Then he went on his journey. 16 The man who had received five bags of gold went at once and put his money to work and gained five bags more. 17 So also, the one with two bags of gold gained two more. 18 But the man who had received one bag went off, dug a hole in the ground and hid his master’s money.

19 “After a long time the master of those servants returned and settled accounts with them. 20 The man who had received five bags of gold brought the other five. ‘Master,’ he said, ‘you entrusted me with five bags of gold. See, I have gained five more.’

21 “His master replied, ‘Well done, good and faithful servant! You have been faithful with a few things; I will put you in charge of many things. Come and share your master’s happiness!’

23 “His master replied, ‘Well done, good and faithful servant! You have been faithful with a few things; I will put you in charge of many things. Come and share your master’s happiness!’

26 “His master replied, ‘You wicked, lazy servant! So you knew that I harvest where I have not sown and gather where I have not scattered seed? 27 Well then, you should have put my money on deposit with the bankers, so that when I returned I would have received it back with interest.

28 “‘So take the bag of gold from him and give it to the one who has ten bags.29 For whoever has will be given more, and they will have an abundance. Whoever does not have, even what they have will be taken from them. 30 And throw that worthless servant outside, into the darkness, where there will be weeping and gnashing of teeth.’” – Matthew 25:14-30

Author’s note: This insight was shared to me at our small group at church. I thank God for the godly men who gather every week to discuss God’s Word.

Jesus could have easily shared this parable with 2 servants – a faithful one who multiplied his talents by twofold, and a miserly one who did not do anything to his talents but bury it in the ground.

That would have still driven home the point.

But Jesus included a servant with 2 talents for a reason. And this reason has only been recently revealed to me.

It is because God wants us to realise that success is not measured by ending with more wealth and talents in hand.

Success is defined by being faithful with what God has given us and making the most out of it. Whether we have more or less than other people – it doesn’t matter.

So make the most of what you have and enter into the joy of your Master.