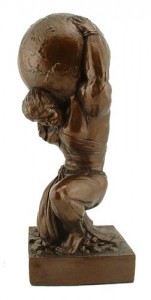 Saving the worldis more often than not the main plot of most video games – with its protagonist being portrayed as one whom everybody will rely on in the story’s darkest hour; the only one who can restore the balance in the universe, the only one who could stop the maniacal and sinister antagonist, the one who will rescue the captive damsel in distress, the one in whose hands lie the fate of the world. What makes such games even more appealing is that we get play the role of the lead character – with the whole storyline revolving around us.

Perhaps such plots tend to awaken something that is inherent in each individual – the whimsical idea of being the central character in one’s own story. Everything is centered on ME. It’s MY story. It’s MY life.

A book on Kokology consists of a set of questions that aims to understand one’s personality by how a person responds. I remember playing this game of question-and-answer with my college friends a few years back, and a particular question struck me: “What’s your immediate reaction when you see a broken clock?” According to the book, the response to the broken clock reflects one’s reaction upon encountering problems. In my case, my response was immediate; “How do I fix it?” reflecting my urge to solve the problem on hand.

While the proclivity of such an urge is not in itself evil, how we satisfy this urge may very well be influenced by our innate sense of entitlement. “It’s up to ME.”, relying on our own resources we brave through life often without regard of an omnipotent and personal God.

The same can be said about the Christian. Often we decide to take action on the basis of our own strength; forgetting, even momentarily, the sovereignty of the God we have come to believe through Christ Jesus – as if reassuming control and dismissing dependence by telling Him, “Lord, I got this one.”

It could be in handling finances.

It could be in fixing a broken relationship.

It could be on trivial decisions.

It could even be in sharing the Gospel.

The Christian may often forget one simple truth that Paul wrote to the church in Galatia.

I have been crucified with Christ and I no longer live, but Christ lives in me. The life I live in the body, I live by faith in the Son of God, who loved me and gave Himself for me.” – Galatians 2:20

We are no longer the protagonists of our respective tales. Rather, we find ourselves to be part of a far grander story alongside its ONLY protagonist – Who calls us to live out our lives relying on His strength, wisdom and grace in order to play the part He has set for us. Paul clearly understood this when he wrote to the Philippians, “I can do all things through Him who strengthens me.”